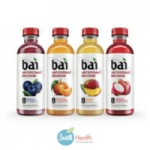 Saturday nights.  The one night of the week where there is absolutely no guilt about indulging in a few drinks and any shenanigans that come with it.

I have to admit – I am a creature of habit.  Once I find something I like, I have no problem sticking with it.  This applies to my alcoholic drink of choice, too.

Back in the day, it was all about calories – who cared about health?  I remember when my drink of choice was Stoli Vanilla and Diet Coke.  YUM!!!

But at this point, soda (even diet) has no place in my diet.

I’m still a vodka girl.  But the diet coke had to go, so my new mixer became club soda.  The taste is surprisingly mild and crisp,  and you can’t do much better health/calorie wise.  So that became my new drink, and it still is today.

But when my health conscious friend introduced me to a delicious new mixer, I have to admit I was very excited.  She shares my passion for healthy eating so I knew it most likely wasn’t high in sugar or filled with chemicals.

The brand is called bai.  Have you heard of it?  I particularly love the molokai coconut flavor. But how could it be so sweet and only have 5 calories?!  My fear was that it did, in fact, have some type of artificial sweetener.

What I found is that it has erythritol.  Yet ANOTHER form of sweetener, but this one is supposedly natural.  So I did my due diligence and here is what I found:

Erythritol is a sugar alcohol.  There are other sugar alcohols you may have seen thrown around on food labels that are similar to erythritol such as, xylitol, maltitol, and sorbitol.   The problem with the three aforementioned sugar alcohols is that they have been known to cause stomach aches, head aches, and diarrhea.

However, erythritol is NOT supposed to cause these symptoms in low doses because your body digests it differently than those other sugar alcohols.  With erythritol, 90% is absorbed before it gets to your intestines and then eliminated (mostly unchanged) in your urine.  The other 10% is absorbed by the colon.

There is still more good news.   The body can’t break down erythritol (which is why it is excreted in your urine unchanged) so it doesn’t affect blood sugar or insulin levels, doesn’t contribute to tooth decay, and has little to no calories.

The catch is that even thought 90% goes right through you and is excreted in your urine, 10% still does get digested and some people can be sensitive to it.  In fact, my friend who introduced it to me told me that she started getting stomach aches from it!  (I haven’t experienced any digestive issues as of late.)

The bottom line is that it seems to be pretty harmless, when consumed in small amounts. Should it become a daily indulgence?  I don’t recommend it.  Water is king and should not be replaced as your go to drink.  But can you feel OK about mixing it with your vodka once (or twice) a week?  Hell yeah!!